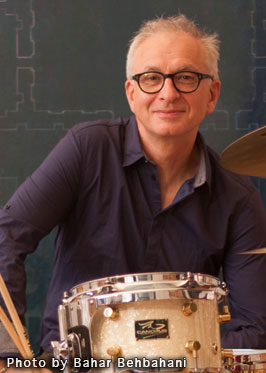 Maciek Schejbal (pronounced MAH-chek SHAY-bal) is world-class drummer based in New York City. In addition to gigging and touring with jazz bands and afro-pop groups, Maciek is an instructor at the Drummers Collective in Manhattan. The Drummers Collective is generally thought of as the drumming equivalent of Los Angeles' Guitar Institute of Technology.

Afro-Polka is Maciek's brand and a nascent genre of music. It's the soundtrack of one musician's voyage from Eastern Europe through South Africa to the USA. He has traveled, listened, learned and amalgamated a huge amount of styles, traditions and art forms into a strong, singular and original musical voice. From Cracow, to Johannesburg and Cape Town, and then onto New York City, Maciek has formed crack rhythm sections with some of the best bass players in the world.

Afro-Polka is Maciek's first album consisting entirely of his compositions. The tunes are performed here with many great musicians he has collaborated with in his journeys. Don’t be scared by the polka, these fresh sounding tracks are very afro-pop and jazz focused. The polka is the added seasoning that makes it unique.

Every player on this record is a virtuoso and has played in bands with or on albums of some very well known musical artists and they are all deserving of recognition. Due to the emphasis on the Maciek's partnerships with bass players, here are some notable connections of the bass players on this album: Fred Doumbe (Manu Dibango, Les Nubians); Bakithi Kumalo (Paul Simon); Leo Traversa (Angelique Kidjo, Don Byron); Gregory Jones (Astrid Gilberto, Savion Glover); Essiet Okon Essiet (Art Blakey, Freddie Hubbard); John Patitucci (Wayne Shorter, Chick Corea).

This is not a typical drummer's solo record. On Afro-Polka, Maciek lays down an amazing array of grooves and melodies and musical worlds reminiscent of Hermeto Pascoal, Joe Zawinul, and even of Frank Zappa. He has a strong command of a wide range of colors and ideas and he makes them his own, not being held back by convention or by the business of making music. He takes the listener on a very personal journey that could only be an expression of his own travels and discoveries. After listening to this recording one has a pretty good idea of how, where and when Maciek has lived, loved, traveled and played throughout his life, with dedication, reverence, love and an open mind.

A Field Guide to the Afro-Polka Recordings:

I never wanted to be fenced in
Something about the call of the horizon
First time I saw you was in silhouette
With galaxies behind you, I could navigate
Now we meet on a similar street
Our lives intersecting twenty years in between and
Baby you look just the same as you did before
With eyes like blue storms over mountains...

I was dying
last time I saw you was on Route 64
getting smaller as I drove away
It's been such a long time since we sang
that wandering song
I've still got that dream if you want
you can come along
and we still have that feeling
that brought us together that long ago time
How does it go again, that half-forgotten song
Can you remember how it goes again?

(...) She [Kaïssa] opened her set with To Ndjé (...), before being joined on stage [Satellit Cafe-Paris] by the twirling Franky [Moulet] on bass, the discrete and efficient Francis Legrand on guitar and, the most Cameroonian of Polish musicians, the grooving drummer Maciek Schejbal. His playing of rhythms such as the bikutsi is as spectacular as it is effective, making him a serious candidate for a place in the pantheon of Cameroon's greatest drummers. (...) 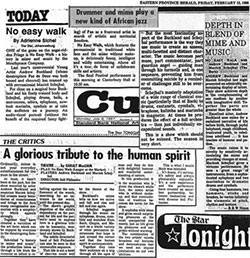